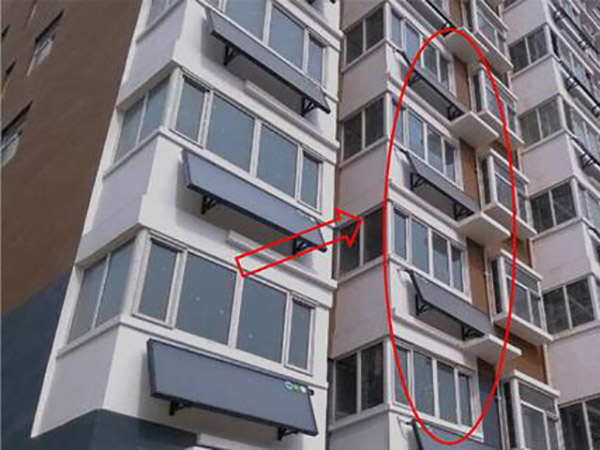 We also analyzed the types, sizes, colors and textures of the main solar collector products on the market.

The size specifications of some brands of solar water heaters on the market are as follows:

·Flat plate collector: the common specification is 2000mm×1000mm, and the thickness is 75~95mm. The specific size can be designed according to the requirements of the building module.

Through the analysis of the modeling of high-rise residential buildings and solar collectors, and find the relationship among them, from the perspective of aesthetics, put forward the following several combined design ideas, so that the collector becomes a part of the architectural modeling, to achieve the requirements of aesthetics.

(1) Strengthen the sense of rhythm and rhythm. Due to the functional characteristics of high-rise residential buildings, some building components are often repeated, such as balconies and windows. The interval repetition of balconies or windows on the façade and the changes in the number, spacing, and direction of the combination can make the viewer’s line of sight produce a dynamic rhythm extending up and down, left and right, combined with the changes in the volume, forming a sense of rhythm and rhythm. The collector can be combined with these building components to form a certain regular arrangement and combination on the facade to form a sense of rhythm. Appropriate local changes can also increase the richness and liveliness of the facade (as shown in Figure 1).

(2) Strengthen the vertical shape. High-rise residential buildings, especially tower-type high-rise buildings, will use vertical and straight lines to emphasize the vertical upward feeling. When the collectors are arranged on the facade, they can be arranged centrally and continuously, or combined with windows and balconies to form vertical divisions, emphasizing vertical lines (see Figure 2).

(3) Facade texture changes. Solar collectors have a special color and texture. The combination of the flat-plate soft texture of the flat-plate collector and the grid-like texture of the evacuated tube collector and ordinary building materials increases the changes in facade materials and enriches the building facade texture. At the same time, the collector can form a certain shadow on the building facade, which increases the contrast between the virtual and the real in the shape and the layering of the space (see Figure 3).

(4) Color coordination and contrast. The facade colors of residential buildings are generally softer, such as milky white, light yellow, brick red, etc., which give people a warm and friendly feeling. Small areas of high-purity colors are also used to increase the liveliness and richness of the overall facade. Solar collectors are generally blue-black and blue-violet due to the use of absorbing coatings. Whether it is installed in a large area or scattered, its own color can also become an integral part of the color of the building facade. It can be coordinated with other building components, such as window frames, railings, glass, etc., or contrast with large areas of light-colored building walls.