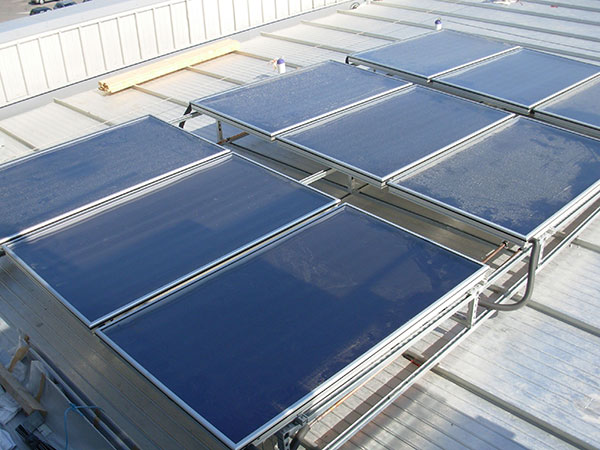 In 1980, the United Nations Development Program and the National Science and Technology Commission jointly invested to build a solar heating and cooling technology demonstration center in Yuzhong County, Gansu Province, which was specifically undertaken by the Institute of Natural Energy of the Gansu Academy of Sciences. By 1983, nine passive solar house demonstration buildings were built in the base. Later, several solar house demonstration buildings were expanded in the Demonstration Center, and a training course for third-world countries solar energy application technicians was organized by the United Nations, which has made contributions to the international solar energy industry.

In 1982, the “China-Federal Germany Renewable Energy Cooperation Project” jointly undertaken by Beijing Solar Energy Research Institute, Tianjin University and Tsinghua University, jointly invested by China and the Federal Republic of Germany, began. The content of the cooperation project is to build a new energy village in Yihezhuang, Daxing County, Beijing. In 1983, more than 100 peasant houses were built in Changping County, Beijing.

China’s national scientific and technological research projects from the “Sixth Five-Year Plan”, “Seventh Five-Year Plan” to the “Eighth Five-Year Plan” have laid a solid technical foundation for the popularization and promotion of passive solar houses in China. The content of these scientific research projects involves various fields of passive solar houses, including basic theoretical research, simulation tests, thermal parameter analysis, design optimization, and the development of materials and components and the construction of demonstration projects.

In terms of basic theory, through the analysis of the heat transfer mechanism of the solar house, the dynamic physical and mathematical models of the solar house’s thermal process were established, and  the simulation calculation software was compiled, and the calculation software and simulation test verification were used to analyze and optimize the relevant parameters that affect the thermal performance of the solar house; and on the basis of a large number of experiments, tests and engineering practices of the built experimental and demonstration solar houses, the optimization design method was proposed; the “Passive Solar House Thermal Design Manual” suitable for China’s national conditions was compiled and published.

(2) Active solar heating heating. China’s active solar heating system began to develop into engineering applications after 2000. The first to practice the application of solar heating and heating projects were solar energy production companies, the representative of which was Beijing Tsinghua Sunshine Energy Development Co., Ltd. and others. After 2005, the application of solar heating and heating projects in my country has entered a period of rapid development, mainly because of the requirements of the country’s overall situation of energy conservation and emission reduction, as well as the strong support of the government and the promotion of related projects.

The “Renewable Energy Building Application Demonstration and Promotion Project” of the Ministry of Finance and the Ministry of Construction has played a huge role in promoting the engineering application of solar heating and heating. The solar heating and heating demonstration projects implemented in this project have a wide geographical distribution and many types of technologies. Its project construction sites include Beijing, Shandong, Inner Mongolia, Shaanxi, Ningxia, Qinghai, Tibet and other provinces, regions and cities in the heating area of northern China; the technology types include solar heating and heating systems that combine short-term or seasonal heat storage with conventional energy sources, as well as comprehensive utilization systems that combine solar energy with ground source heat pumps, biomass energy and other renewable energy sources. According to project requirements, these demonstration projects must undergo performance and benefit testing and analysis after completion, and only those that meet the requirements can pass the project acceptance. This provides conditions for scientifically and reasonably summarizing engineering experience, and also enables these pilot projects to truly play a demonstrative role.

In terms of regional distribution, Pinggu District has the largest number; according to the types of collectors used, flat plate collectors account for the largest proportion, accounting for about 72% of the total collector area.