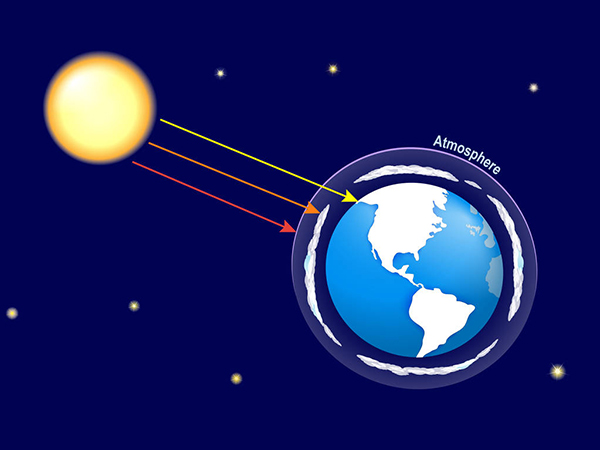 The solar radiation energy gradually weakens from low latitudes to high latitudes. Assuming that the atmospheric transparency of high-latitude regions and low-latitude regions are the same, compare them under these conditions, as shown in Figure 2. Take the vernal equinox at noon, when the sun is shining vertically on point F on the earth’s equator, suppose there are two other points B and D on the same longitude. The latitude of point B is higher than the latitude of point D. It can be clearly seen from the figure that the distance of the atmosphere required by sunlight to reach point B is longer than the distance CD of the atmosphere required by sunlight to reach point D, so the vertical radiation flux at point B will be smaller than that at point D. The vertical radiant flux at point F is the largest on the equator, because the sunlight traverses the shortest path EF in the atmosphere. For example, St. Petersburg at high latitudes (60°N latitude) can only get 335kJ of heat per year on an area of 1cm2; while in my country’s capital Beijing, because of its mid-latitude (39°57′N latitude), it can get 586k] In the Sahara area at low latitudes, you can get up to 921kJ of heat. It is for this reason that the equatorial zone has a hot climate throughout the year and green in all seasons, while near the Arctic Circle, it is cold all year round, covered in silver and covered with snow and ice, like two different worlds.

This is also an important factor affecting the solar irradiance on the ground. If there are 14 hours during the day in a certain area, of which 6 hours are cloudy, and the sun shines at 8 hours, then the sunshine time of that day in the area is said to be 8 hours. The longer the sunshine time, the more total solar radiation that the ground receives.

The higher the altitude, the higher the transparency of the atmosphere and the higher the direct solar radiation. In addition, the distance between the sun and the earth, topography, topography, etc., also have a certain impact on solar irradiance. For example, the average temperature of the earth at perihelion is 4℃ higher than that at aphelion. Another example is that at the same latitude, the temperature in the basin is higher than that of Pingchuan, and the sunny slope is hotter than the shaded slope.