The development history of solar heating 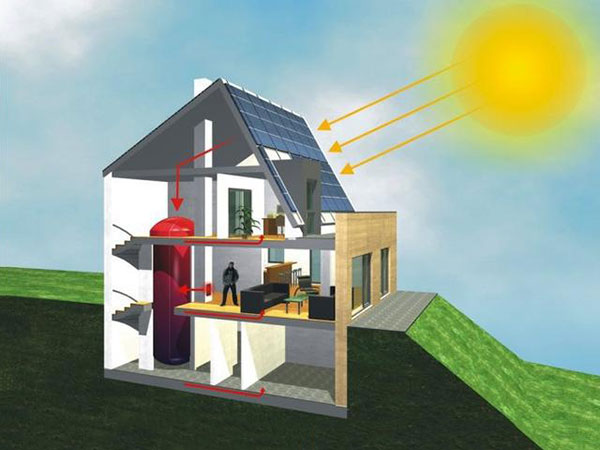 The development history of solar heating

According to internationally used names, solar heating methods can be divided into two categories: active and passive.

The active type is a forced circulation solar heating system composed of solar collectors, pipes, fans or pumps, terminal heat dissipation equipment and heat storage devices; the passive type uses the reasonable arrangement of the building orientation and surrounding environment, the ingenious treatment of the internal space and external shape, and the appropriate choice of building materials, structure and structure, so that the house can collect, maintain, store, and distribute solar heat in winter, moderately Solve the heating problem of the building. Houses built using the principle of passive solar heating are called passive heating solar houses. Active solar heating systems are designed by HVAC engineers, while passive heating solar houses are mainly designed by architects.

Compared with pure solar hot water supply, for a long time, China’s solar heating, heating technology and engineering application level that combines winter heating has been low. Due to the complexity of the active solar heating system, many equipment, the initial investment and regular maintenance costs are higher than passive solar heating, and China is a developing country, economic development is relatively backward, based on the national conditions, the policy adopted in the past is to give priority to the development of passive solar heating .

①Scientific research and development and demonstration stage (from the late 1970s to the mid-1990s).

②Demonstration and promotion stage (2000 to present).

At present, China has completed several pilot projects for active solar heating in single buildings, such as the office building of Beijing Tsinghua Sunshine Energy Development Co., Ltd., the Jiangjunguan and glass terraces of the Beijing Pinggu New Countryside Construction Project, and the Lhasa Railway Station. However, solar district heating and heating projects (community heating station level) have not yet been applied in practice.

The “Renewable Energy Building Application Demonstration and Promotion Project” launched by the Ministry of Finance and the Ministry of Construction in May 2006 included more solar heating and heating projects. Among the 212 projects declared and approved from 2006 to 2007, the integrated solar energy + heat pump project accounted for 25%. Among them, the solar seasonal heat storage + ground source heat pump heating integrated application system located in the Science and Technology Park of the Chinese Academy of Building Research, Tongzhou District, Beijing, is the first domestic seasonal heat storage solar heating pilot project. After the implementation of this project is completed, it will greatly promote the development and improvement of China’s solar heating technology.

Solar heating is the most likely to be popularized and promoted in China after solar water heating. The “Eleventh Five-Year Plan” will be an important transition period for solar heating from application demonstration to application promotion. One of the key turning points was that the national engineering construction standard “Technical Specifications for Solar Heating Engineering” was released and implemented in 2009, which provided technical support for the standardized design, construction, and acceptance of solar heating engineering, and laid the foundation for further application and promotion.