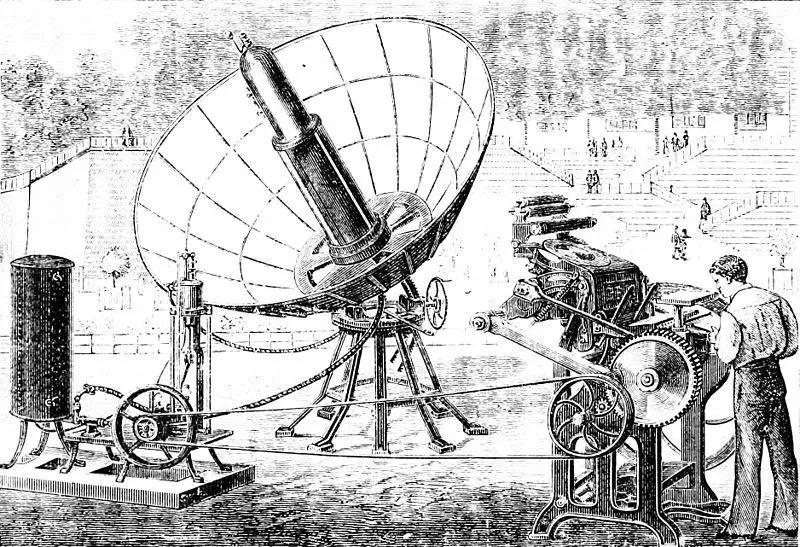 The history of modern solar energy utilization starts from the French engineer Solomon de Cox inventing the world’s first solar-powered pump in 1615. The main achievements of this stage are: In 1878, the Frenchman Pefson developed a printing press powered by solar energy. In 1883, the Swedish-American Eriksson made a solar-powered motorcycle, which can drive a 1.6-horsepower (1 horsepower=735.499W) reciprocating engine during the summer test. These power devices use a condensing method to collect sunlight, the engine power is not large, and the working medium is mostly water vapor, which is of little practical value.

At this stage, the focus of the world’s solar energy research is still solar power devices. At this stage, the concentrating methods used are diversified, and flat-plate collectors and low-boiling point working fluids have been adopted. At the same time, the scale of the device has also been expanded. The output power of the largest one has reached 73.55kw. The practical value has increased, but the cost is still high. The main achievements worth mentioning at this stage are: In 1901, American Innis built a solar pumping device in California, using a truncated cone concentrator that automatically tracks the sun, with a power of 7.36kw, and Wells built 5 sets of dual-cycle solar engines in the United States from 1902 to 1908, which are characterized by the use of low-boiling working fluids such as ammonia and ether, and flat-plate collectors. In 1913, Schumann cooperated with Boyce to build a solar powered irrigation system composed of 5 parabolic trough mirrors each 62.5m long and 4m wide, south of Cairo, Egypt. The total lighting area is 1250m2 and the power is 54kw.

Due to the large-scale exploitation and application of fossil fuels and the impact of the outbreak of the Second World War, the research and development of solar energy utilization is at a low ebb at this stage, and the number of people participating in research work, research projects and research funds have been greatly reduced.

In the 20 years after the end of the Second World War, attention was paid to the large-scale exploitation and utilization of oil and natural gas, and their resources were bound to decrease day by day, and they began to pay attention to the research and development of solar energy. At this stage, research on the utilization of solar energy began to recover, strengthened the research on basic solar energy theory and basic materials, and achieved major breakthroughs in key technologies such as selective solar coatings and silicon solar cells; flat-plate collectors have made great progress. , The technology is gradually mature; the research of solar energy absorption air conditioner has made progress; a batch of experimental solar houses have been built. In October 1954, the Applied Solar Energy Association was established in New Delhi, India, which is now the International Solar Energy Society (ISES). Then, in December 1955, an international solar energy conference and exhibition was held in the United States with more than 30,000 representatives from 37 countries. In 1954, Bell Labs in the United States successfully developed a practical silicon solar cell with a photoelectric conversion efficiency of 6%, which laid the foundation for the application of solar photovoltaic power generation technology. In 1955, Israel Taber and others put forward the basic theory of selective coating at the first international solar thermal science conference, and successfully developed practical selective coatings such as black nickel, which created conditions for the development of high-efficiency solar collectors. In 1958, solar cells were used in space for the first time and were equipped on the Pioneer 1 satellite of the United States.