The sun is a huge fireball 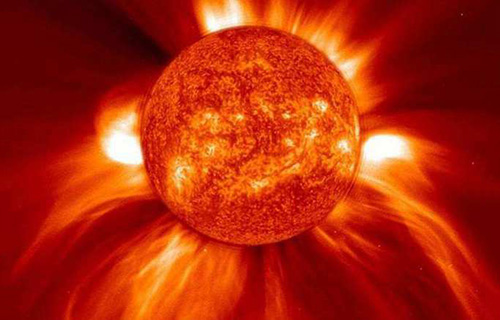 The sun is a huge fireball

The relationship between the sun and humans is very close. Without the sun, there would be no day; without the sun, all living things would die. The energy used by mankind, whether it is coal, oil, natural gas, or wind and water power, comes directly or indirectly from the sun. The sun is the source of light and heat, and the root of all life phenomena on the earth. Without the sun, there would be no human beings. The sun we see is a huge spherical hot air mass, and the entire surface is a sea of boiling fire, which is constantly undergoing thermonuclear reactions all the time. According to the research and exploration of scientists, the sun can be divided into two parts: the atmosphere and the interior. The solar atmosphere has three levels, the innermost layer is the photosphere, the middle is the chromosphere, and the outermost is the corona (see Figure 1).

The radiant, mirror-like round surface that people usually see is the photosphere. It is the lowest layer in the solar atmosphere, that is, the layer closest to the inner part of the sun, with a thickness of about 500km. Its temperature is around 5700K, and the sun’s brilliance is basically emitted from here. Its pressure is only 1% of atmospheric pressure, and its density is only a few hundred millionths of water.

When a total solar eclipse occurs, a beautiful colored ring can be seen around the moon wheel, which is the chromosphere of the sun. It is located outside the solar photosphere and is a sparse and transparent layer of solar atmosphere, mainly composed of hydrogen, helium, and calcium plasma. The thickness varies from place to place, with an average of about 2000km. The temperature is higher than that of the photosphere. From 4600K at the top of the photosphere to the top of the chromosphere, the temperature can increase to tens of thousands of degrees, but the total amount of visible light emitted by it is not as good as the photosphere.

When a total solar eclipse occurs, there is a silver-white ring of varying thickness around the sun. This is the coronal layer, which is the outermost layer of the solar atmosphere. The shape of the corona is very irregular, and the homochromosphere has no obvious boundaries. Its thickness is not uniform, but it is large, and it can extend to 5×106~6×106 km. Its constituent materials are extremely rare, only a few millionths of the density of the high-altitude atmosphere of the earth. The brightness is also very small, only one millionth of that of the photosphere. But its temperature is very high, reaching more than 1 million degrees Celsius. According to different heights, the corona can be divided into two parts: the height below 1.7×105km is called the inner corona, which is pale yellow, and the temperature is above 1 million degrees Celsius; the height above 1.7×105km is called the outer corona, which is bluish-white, and the temperature is slightly lower than that of the inner corona.

Almost all of the sun’s matter is concentrated inside, and the proportion of the atmosphere in the total mass of the sun is extremely small, which can be said to be insignificant. In the outermost layer of the interior of the sun, the troposphere is immediately followed by the photosphere. The gas in this area is often in a convective state of ups and downs. Its thickness is about tens of thousands of kilometers.